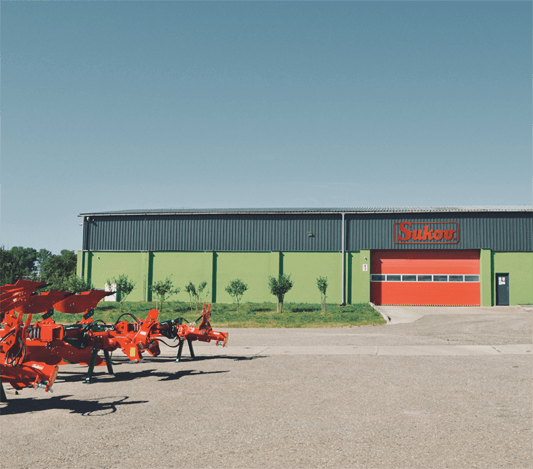 We have our own production plants equipped with modern technological equipment for cutting, forming, turning and thermal treatment of material. We use the quality boron steel for the production of ploughs.

The strategy of SUKOV s.r.o. is based on proper conduct and the ability to accommodate our customers and business partners.

Our ploughs help to farmers all over the worlds. We rank among the TOP TEN companies in the world producing ploughs.

Our Company is a holder of the European-Asian community certificate (EAS) for export to such countries.

The company starts its production activities in the operational premises in city Jarošov. The company's first plough was produced here. Besides to single-beam ploughs, the company also produced other agricultural implements for lack of these implements on market. They were produced for small and small farmers for mini-tractors and tractors of domestic production (potato lifter and others).

Moving to a new production headquarter and starting production of mounted plough.

During the year 1993 the company has moved to the new production premises in Huštěnovice, where it operates and has its headquarters to this day. The production area also includes storage and other premises used to present the produced ploughs.

Besides to Single-beam mounted plows, is finishing of development of a new reversible ploough, and is produced in the then popular blue color. These ploughs, thanks to their affordable price and high quality, are being demanded among farmers and are being produced to this day in an innovated form.

Thanks to the demand on the market, the manufactured range of plughss is now being expanded to include semi-mounted plows. Production is modernized, ploughs are produced in blue and red.

Production is being further modernized. New production and storage facilities are put into operation. Significant success is achieved this year. It is procudes the first 12-furrows semi-mounted ploough that travels to a customer in Siberia-Russia. The plough has became the company's flagship. The company traditionally participates in the third largest agricultural exhibition in Europe - TECHAGRO in Brno, where it has its exhibition stand, as every year.

Europe is not sufficefor us, we are expanding our coveragw to the African continent. The first contract is being prepared to supply 200 pieces of the single-beam mounted ploughs to West Africa. With the increasing in the sales of the produced products, the commercial and production departments are also expanding with new employees. The company already supplies its products to more than 20 countries.

We use cookies to make your work with the website more pleasant. By clicking the Allow everything button, you agree.

What can we store?

The necessary cookies are necessary for the proper functioning of the website and their use cannot be disabled. These cookies do not participate in any way in the collection of data about you.

Preferential cookies primarily serve to make your work with the website more pleasant. We use it to be able to display relevant information (eg. recommended articles) on the site.

Analytical cookies help us measure website traffic and events on the site. We then evaluate this data as a whole, ie. we do not use them for your identification.

We use marketing cookies primarily so that we can show you ads relevant to your interests that will not bother you. By enabling these cookies, you will enable us to make your work with the website more pleasant.